The Olympics has given us a little bit of diversion from all the Covid19 saga and sadness. Plenty of dedication, perseverance, new records and history involved in the Olympics. One of our Newsletter readers, Don McClelland, reminded me of an article and the story of C. Bow Bells. This is one of the most treasured articles that I ever read. If there was an Olympics for orchid articles, it would walk straight up to the podium for its medal! Art Chadwick Jnr of Chadwick & Son Orchids USA has generously given me permission to reproduce this article in this newsletter.

It is not just a story of history. It highlights the importance ploidy has made in every major orchid breeding advance. Also, breeders replicating results of hybrids and questioning documented parentage. It is amazing that after all these decades C. Bow Bells is still ringing Bells all around the world. Even in Australia, Burdekin Bells (1985), Glenlee Bells (2009), CRB’s Morning Bells (2013), Burbank Bells (2014), Deception Bells (2018), Ubon Bells (2021).

The Bells will keep ringing. The story of C. Bow Bells makes me comforted that we will survive Covid 19, and will see important developments that will improve our future!

Thank you for your support.

It has been nearly 65 years, almost the length of human lifetime, since a Cattleya hybrid named Bow Bells burst upon the orchid stage. The year was 1945 and the stage was the September meeting of the Trustees of the American Orchid Society. At the meeting, Clint McDade of Rivermont Orchids exhibited five plants of a new white cattleya hybrid called Bow Bells that had such outstanding flowers that one was awarded a First Class Certificate and the whole group received a rare Silver Medal of Excellence from the American Orchid Society. Amazingly, four of the five plants were seedlings flowering for the first time.

The next appearance of C. Bow Bells was at the 1948 Miami Orchid Show where two more plants received First Class Certificates from the American Orchid Society. Such awards were unprecedented, and in one brief moment in the long history of cattleyas, this fragile flower had revolutionized the quality of white cattleya hybrids. It had raised it to the rarefied level of near-perfection by all the judging standards and C. Bow Bells would go on to become one of the most awarded hybrids in orchid history.

Cattleya Bow Bells was a product of the breeding program of the British orchid company Black & Flory who gave its name and registered it with the Royal Horticultural Society in April 1945. Black & Flory was known for breeding fine cattleya hybrids and Clint McDade had purchased a large number of C. Bow Bells seedlings before any of them had flowered. When they began blooming in his greenhouses on Signal Mountain, Tennessee, he found he was sitting on a gold mine. McDade later described C. Bow Bells as a “a botanical phenomenon among orchid plants.” He said “All plants grown from this one seed pod are strikingly similar in having all the superior qualities desired in orchids. The plant itself is noted for its vigor and consequently is less difficult than most plants to grow. The flowers have all the desirable qualities of a fine orchid. The wide petals and sepals have good form and carriage and the large wide lip has a ruffled edge.” Some white cattleya crosses before C. Bow Bells had produced a few good varieties, but with C. Bow Bells almost all the plants were worthy of an award. Earlier whites were often poor growers, so C. Bow Bells was superior on all counts to its predecessors. After giving 49 Awards, including 18 Awards of Merit and 5 First Class Certificates to the first plants exhibited, American Orchid Society judges decided there was no virtue in giving additional awards to C. Bow Bells. They were all too good.

The story of C. Bow Bells, of course, is not just the tale of a fine cattleya hybrid, for like all good stories, there are elements of romance, sadness and intrigue intertwined in it. The hybrid was named for the bells of St. Mary-Le-Bow- a church in the financial district of London. The church was such a legend in the city that it was said that you were not a true cockney or Londoner unless you were born within the sound of its bells. The church was badly damaged by Hitler’s bombers during the second world war, and it was still in need of repair when I first saw it in 1955.I suspect Black & Flory named their cross Bow Bells to help with the effort to raise money to rebuild the church and, perhaps, as a reminder of the church’s survival of London itself during the war. The hybrid is certainly a worthy tribute to a great city.

But there is also the sad story of the fate of the magnificent parent, C. Suzanne Hye, which was used to make C. Bow Bells. The plant was so outstanding that Black & Flory did everything possible to see nothing happened to it. When it was clear that Germany was planning to invade Great Britain, Black & Flory took the unusual step of packing up the plant and shipping it to safety in the United States where it would be over 3000 miles from the war zone. Safe passage, however, was not in the cards for Cattleya Suzanne Hye and the boat on which it was traveling to America was torpedoed by a German submarine. The boat sank to the bottom of the Atlantic Ocean and the plant was lost forever – and no one could ever remake the fine original C. Bow Bells again.

Most plants of C. Bow Bells were triploids genetically which suggests that one parent was a tetraploid and the other a normal diploid. The tetraploid parent, of course, had to be Black & Flory’s C. Suzanne Hye. Since triploids are usually sterile and cannot be used for breeding, there was a lot of concern at first that C. Bow Bells could not be used to produce other hybrids. Genetic studies by a number of groups, however, turned up a few diploid and tetraploid plants that could be used to make new hybrids. The tetraploids had the best flowers and were the ones used to make the first crosses.

While many growers had tried to remake C. Bob Betts, many more broke new ground by crossing C. Bow Bells with every good white cattleya in sight and the bells rang out for years with new hybrids. There were C. Princess Bells, C. Empress Bells, C. Angel Bells, C. Sleigh Bells. C. Laura Bells, C. Vesper Bells, C. Signal Bells, C. Tiffin Bells, C. Tribells, C. Gaston Bells, Bc. Heaton Bells, Lc. Margaret Bells and the list went on and on. In no time at all. C. Bow Bells had fathered a whole new generation of white cattleya hybrids – hybrids that would dominate the genetics of fine white cattleyas even to this day. Because of its excellent shape, C. Bow Bells was even crossed with large purple cattleyas in the hope that it would somehow improve their shape too.

I have pictured a few of the well-known varieties of hybrids that have C. Bow Bells in their ancestry to show how remarkable these offspring are – but there are, of course, many more C. Bow Bells progeny grown by commercial growers and hobbyists that are just as good. The two originals. C. Bow Bells and its first born, C. Bob Betts. However, are still hard to beat and are often better that the multitude of white hybrids that came after them.

Lots of people have a sentimental spot in their hearts of C. Bow Bells and I am no exception. When I went into to cattleya cut-flower business in 1955, my partner, Louis Grabosky, had just bought 600 flowering-size C. Bow Bells seedlings from Everest McDade. The plants were from a selfing of the famous C. Bow Bells ‘Honolulu’ and they formed the basis for our fall production of white cattleyas. In 1962, I took the finest variety from this group of C. Bow Bells and exhibited it at the first orchid show of the Central Florida Orchid Society in Orlando. Florida. The plant won Best of Show and I named it “variety Anne Chadwick” for my bride of just a few months. The plant, the silver bowls, the silver cream and sugar service and the blue and multicolored ribbons along with Anne’s smiling face and slender figure, were pictured in full color in the Orlando daily newspaper, the Orlando Sentinel, – not once, but twice. My wife, of course, was hooked on orchids from that day to this and I can only say thank you, thank you, thank you to Cattleya Bow Bells – and thank you ‘Anne Chadwick’; it has been a wonderful ride. 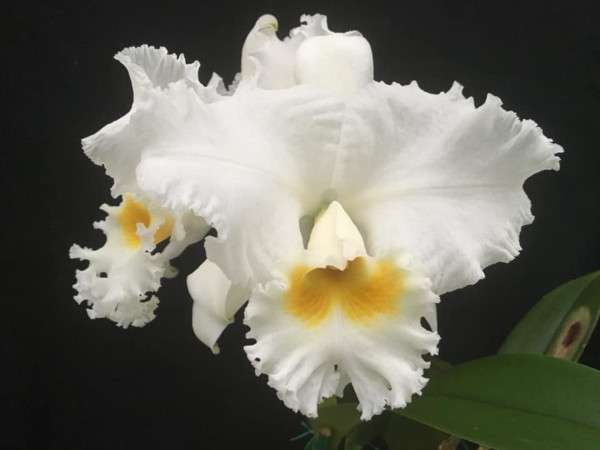 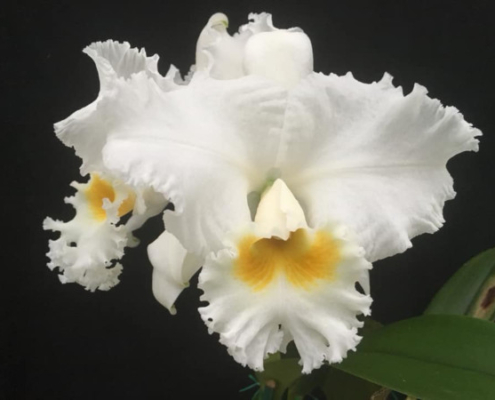 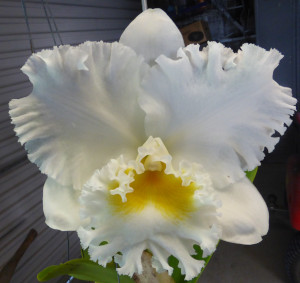 September 2021 Up Date
Scroll to top