Winter weather certainly set in over the last month. So far we have used more firewood in the combustion heater than all of last year. Even had to go for a country drive to Woodford to get more ironbark!

A new selection of flasks currently available has been uploaded on our website. These are in very limited numbers available for a short time only. Flask shipments continue to be an expensive and complicated process.

Following is some information about Orchid Species we hope you find of interest.

What is an Orchid Species?

It is hard to make a simple definition of “Species”. My attempt would be that an orchid species is a naturally occurring population of orchids sharing closely similar characteristics, that breed within this population, but do not breed with other populations of orchids.

There are estimated to be 25-30,000 orchid species in the world making the Orchidaceae family one of the largest. The name “Orchid” comes from the Greek word “Orchis” (meaning testicle). This refers to the shape of the root tubers that were observed in some of the genus Orchis species.

How did Orchid species evolve and become distinct from each other?

Habitat Separation – This could be those growing in high or low light, warm or cooler temperatures, altitude, humidity and rainfall etc.

Flowering habit and pollinators – Species may flower in different seasons and require different types of pollinators in order to reproduce.

Genetic incompatibility – There can be too large a difference in DNA, chromosome numbers etc. for them to produce viable seed.

When did Orchids become a separate Family of plants?

The taxonomy of Orchidaceae (Orchid family) has evolved and changed over the past couple of centuries and will evolve further in the next.

Carl Linnaeus described eight genera of orchids in 1753. Another taxonomist, De Jussieu described Orchidaceae as a separate family of plants in his publication Genera Plantarum in 1789. In 1817 taxonomist Louis Claude Richard defined the descriptive terminology of orchids. Followed by John Lindley (considered the “father’ of orchid taxonomy) when he described four subfamilies of Orchids between 1830-1840. And so, Orchid classification and species identification continued to this day and will continue in the future.

How are Orchid species differentiated from other plant species?

The following features of the flower identify it as being an orchid as opposed to all other types of flowering plants. All of these must be present to classify it as an Orchid.

Following on from this, taxonomists classify different species of orchids based upon a range of other individual characteristics. These can include morphological structures, growth habits, flower and pollination structures, ecological distribution etc. In more recent years DNA analysis of similarities and differences have been increasingly used for taxonomic identification.

Where do different Orchid species grow?

With 25-30,000 species, approximately 1000 genera, Orchids are distributed in a wide range of habitats around the world. It is a common “Myth” that Orchid species are all from tropical climates. It is true that some 10,000 species of Orchids are found in tropical areas, but this still leaves another 15-20,000 species growing elsewhere.

Orchid species are found in habitats from sea level to 4,600m elevation. Species of Dendrobiums are found in hot, wet tropical habitats. There are a number of Oncidium and Brassia species that grow on Cacti in the dry desert areas of South America. A species of Habenaria grows almost aquatically in the Everglades of Florida. Corallorhiza trifida and Platanthera obtusata grow in peaty bogs in the low Arctic tundra. Corybas sulcatus grows on sub–Antarctic Macquarie Island.

Does this put an end to the “tropical orchid myth” ?!!

Natural hybridization between Orchid species has been recorded over decades with a number of different genera across many countries around the world. It can occur when there is close habitat association, overlapping flowering times, sharing common pollinators and they are genetically compatible.

It may result in a “hybrid” population which becomes numerically significant and established in the habitat. Over time, this creates a “new” species. “New” species may also result where there have been geological events (eg. Continental drift, mountain, earthquake or volcanic events) which physically separate an established species population. The divided population of species, over time, will develop differing characteristics.

So, genetic “purity” is not necessarily the case with Orchid species. Dr Ruben Sauleda (research taxonomist -PHD in Biology with a specialty in Orchid taxonomy) and Ruben In Orchids proposed that the highly variable characteristics of Encyclia tampensis found in Florida was because it was actually a hybrid between three species. Dr Charlyle Luer (botanist and co-founder of Marie Selby Botanic Gardens) established genes from Encyclia phoenicea and Encyclia plicata were present in Encyclia tampensis in Florida, even though those species are no longer found growing naturally in Florida.

The names of many orchid species and genera can change throughout time as reclassification is undertaken based on further examination and evidence. Of recent years there are many orchid genera and species given new names based on DNA taxonomy. As a result, even the names of Orchid species may not be “pure”.

Over recent years there has been much opinion and disagreement between specialist hobby orchid growers and professional orchid taxonomists undertaking orchid genera and species taxonomy. There is an Asian saying that I like very much – “Like the chicken talking to the duck”. Meaning – plenty of dialogue and noise going on, but neither really understands each other!

Orchid species growing naturally in their native habitat undisturbed are essentially virus free. Virus has been reported in such orchids, but it is very rare. This is due largely to the fact that Kangaroos, Emus and Wombats when wandering around and find a new Orchid species do not collect it, cut it up and swap pieces amongst themselves.

Enter human participation to cultivation then it is an entirely different story. Species orchids in hobby orchid collections and nurseries have the same prevalence of virus as Hybrid orchids depending on the growers virus management practices. This was confirmed in a survey conducted by Dr Don Gowanlock sponsored by the Australian Orchid Council. 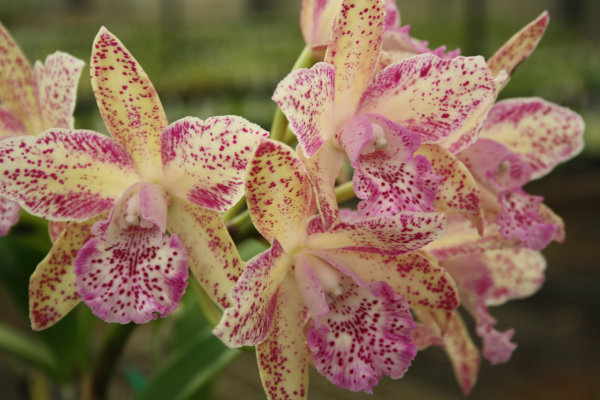 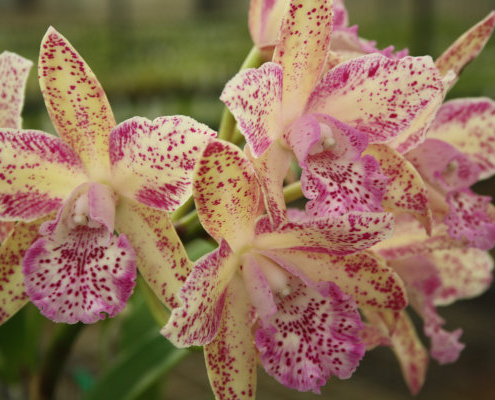